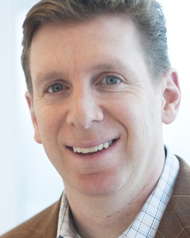 Bryan Wiener is Chairman and CEO of digital agency 360i and Chairman of Dentsu North America, an operating unit comprised of Dentsu agencies 360i, Attik, Firstborn, Steak, Dentsu America and DentsuBos.

Under Bryan’s leadership, 360i has been named the #1 Standout Shop on Advertising Age’s A-List and one of the "World’s Most Innovative Companies" by Fast Company. The agency uses data to inspire ideas that drive conversation and commerce for brands including Coca-Cola, Oreo, Smirnoff, Capital One and NBC Universal. Bryan’s visionary leadership has resulted in a unique agency culture powered by curiosity, earning 360i distinction from both Crain's and Advertising Age as one of the "Best Places to Work" in the country.

Bryan has been named a Top 50 person in media two years running by Mediaweek and an Advertising Age Media Maven. Additionally, he was inducted into the Professional Gallery of Syracuse University’s Newhouse School of Public Communications for his contributions to the industry.

Prior to 360i, Bryan served as President of Net2Phone Global Services, a pioneer in VoIP communications technology. His digital media background dates back to 1994 and includes a series of senior management positions at Standard & Poor’s and TheGlobe.com, one of the largest web 1.0 social media communities.

Bryan is currently Chairman of the 4A's Digital Board, a member of the 4A's National Board of Directors and the IAB Agency Advisory Board, and chairman of NYU's Media & Entertainment student association advisory board. He is a sought after industry expert, appearing in publications such as The Wall Street Journal, Advertising Age, The New York Times and Forbes. Bryan holds an M.B.A. from the Stern School of Business at NYU and a B.A. in History from Syracuse University.