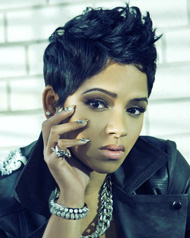 It wasn’t difficult to figure out what it was RaVaughn wanted to do when she grew up. Among her constant companions as a youngster were a karaoke machine and a small keyboard.

“I’d go to a restaurant with my family,” she recalls, “and my mom would say, ‘RaVaughn, you don’t need to take that in with you.’ And I’d answer right back, ‘Yes, I do.’”

One listen to the funky uptempo track alerts you right away: RaVaughn (pronounced Rah-Von) isn’t just another female singer. Meshing perfectly with Wale’s energetic flow, she declares, “Don’t get it messed up, I’m special, special. And not everyone knows how to care for me no. So if I give you a chance, I’ma need you to show me that you know what valuable is when you see it.”

Nicknamed by Ne-Yo as the “New Voice of Women,” RaVaughn is a natural songstress whose frank, yet sophisticated swag — paired with inventive melodies and sassy riffs — brings a barrier-breaking vitality to R&B/pop. That’s because her versatile style was honed doing demos and background work for such marquee names as Celine Dion, Natasha Bedingfield, Jennifer Hudson, Kelly Clarkson, Nicki Minaj, Brandy and Keri Hilson.

“Those experiences opened my world up beyond R&B and into pop and rock,” says RaVaughn. “It’s not about genre for me. It’s about singing and telling relatable stories.”

And RaVaughn does just that on Love Always. The set opens with the romantic pledge “All I Ever Wanted,” whose left-of-center harpsichord intro flows into an easygoing marching drum groove. The depth of RaVaughn’s vocal skills shines on the ethereal ballad “ATL to LAX” and the guitar-driven “Best Friend” with its melodic pop/folk vibe and arresting lyrics: “I’ve been sitting on this bench too long while you playing with these basic fake chicks?” Other noteworthy tracks include fiery break-up anthem “Over” and the take-charge “Lovin You” featuring featuring Marsha Ambrosius and Ne-Yo. A-list songwriter/producers Stargate, Babyface, Rico Love, Jim Jonsin and The-Dream also collaborated with the talented newcomer.

“There are so many women in my generation who fall in love and forget about themselves and how much they’re worth,” says RaVaughn of the inspiration behind Love Always. “If guys treat them bad, many will say, ‘It’s okay; I’ll just deal with it.’ I want to stop that.”

RaVaughn’s musical persona was influenced by such powerful and empowering singers as Mary J. Blige (“I love how she connects with her passion”), Aretha Franklin and Anita Baker while growing up just outside Los Angeles in Carson, CA. The eldest of three siblings born to the Brown family, she was a precocious two-year-old who first took center stage on the mic of a My First Sony cassette recorder. At four and a half,
RaVaughn had graduated to piano lessons.

Five years later she was attending L.A.’s performing arts center Amazing Grace Conservatory where RaVaughn landed such stage roles as Dorothy in “The Wiz” and Deena in “Dream Girls.” Relocating to New York for college, RaVaughn returned to L.A. to join a new female group. Although that situation didn’t pan out, her relationship with the group’s writer/producer Robert “Storm” Daniels (Robin Thicke) did. Daniels began recruiting her for lucrative demo gigs. Ongoing word of mouth resulted in RaVaughn becoming a background singer on the popular television series “Glee” for three seasons. It was after leaving one of those late-night sessions that she received a career-changing call. Writer/producer Emmanuel “Eman” Kiriakou wanted her to come right over and do a demo for him and another writer — Ne-Yo.

“I was content doing demos,” recalls RaVaughn, “having fun and getting paid. Then Ne-Yo asked if I’d be interested in working with him.”

Now RaVaughn is ready to showcase her unique vocal talent and engaging effervescence on the main stage. “It’s all about how well you relate to people,” she says.“I’m the girl next door who’s been given the opportunity to share my music.”