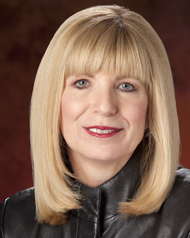 Marlena is the Chief Creative Officer of McDonald’s Corporation where she is responsible for all of the advertising for Brand McDonald’s. She was instrumental in the creation and implementation of the current business-building, creative, award-winning “I’m lovin’ it” advertising campaign for McDonald’s. Subsequent to her joining McDonald’s, Marlena held a number of creative roles with Leo Burnett and Ogilvy & Mather. Marlena is the recipient of several industry business and creative awards. In 2004, her career and efforts on behalf of McDonald’s were honored with the Chicago Advertising Woman of the Year Award.

When not helping to polish the “golden arches,” Marlena is active in the Chicago advertising community. In 2006 and 2007, she served as President of the Chicago Advertising Federation. She is often a featured speaker at industry events and at schools throughout the country. Additionally, Marlena mentors many people seeking careers in advertising and marketing.