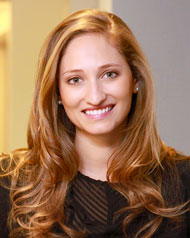 Coley is responsible for the development of Visa’s global visual identity system for the 2014 FIFA World Cup Brazil™ and manages the execution for Visa’s entire onsite branding presence across 12 stadiums throughout Brazil. She has become proficient in Portuguese to be even more effective in Brazil. Previous to the FIFA World Cup™, Coley supported Visa’s sponsorship of the 2013 FIFA Confederations Cup™ and the 2012 London Olympics. Coley began her career at Visa four and a half years ago in the inaugural year of Visa’s new graduate rotational program. In 2013, Ms. Holnback was recognized by Ad Age Magazine as one of their ’40 under 40’ as well as the ANA as a Rising Marketing Star. She is a Colorado native and 2009 graduate of the University of Denver and currently lives in San Francisco, California.