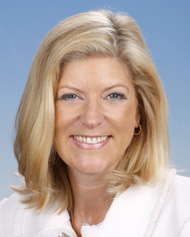 Frances Allen has served as president of the Jack in the Box brand since October 2014. She joined the company with more than 30 years of branding and marketing experience, including senior leadership roles at such major organizations as Denny’s, Dunkin’ Brands, Sony Ericsson Mobile Communications, PepsiCo and Frito-Lay. From 2010 to October 2014, Ms. Allen worked for Denny’s Corp., most recently as its chief brand officer and, previously, as its chief marketing officer. From 2007 to 2009, she was chief marketing officer of Dunkin’ Brands; from 2004 to 2007, she was vice president of marketing, North America at Sony Ericsson Mobile Communications and from 1998 to 2004, she held several positions at PepsiCo, most recently as vice president of marketing. Frances began her career in 1983 at a London-based advertising agency, D’Arcy Masius Benton & Bowles (DMB&B). She held several positions with that agency, most recently as senior vice president, worldwide account director. In 1997, she joined Frito-Lay as director of international advertising. Frances is a mathematics graduate of Southampton University in Hants, United Kingdom, and of the Harvard Business School Advanced Management Program.