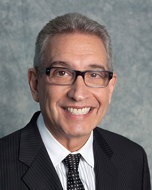 Angel A. Aloma, Executive Director of Food For The Poor, oversees fundraising and communications for the organization, while encouraging innovation and cultivating donor relationships. Fluent in Spanish, proficient in Creole and Patois, Aloma shares the charity’s mission throughout the Caribbean and Latin America.

In his 21 years as a teacher Angel led numerous mission trips with his students to Caribbean countries. He is specially attuned to the plight of the poor in our hemisphere and frequently visits those areas accompanied by donors, employees and community and church leaders interested in the mission.

Aloma is a graduate of the University of Windsor in Canada and received his Master of Science Degree from Nova Southeastern University. He lives in South Florida with his wife and has three children and nine grandchildren.