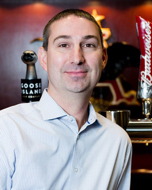 Dan Andrzejewski is vice president, indirect and commercial procurement for Anheuser-Busch (AB) in the United States and Labatt Brewing Company in Canada, both wholly-owned subsidiaries of Anheuser-Busch InBev. In his role, Mr. Andrzejewski leads a procurement team that manages sales, marketing, indirect services and supplies, technology, maintenance and capital equipment. The commercial procurement team specifically works in close partnership with AB marketing and sales to not only deliver cost efficiencies, but also plays a key role in bringing added value, transforming external partnership models and evolving the tools and analytics utilized to drive AB businesses. Dan joined AB in 2006 as part of the indirect procurement team, and in 2009 became part of the leadership team at AB, focused on building the initial commercial procurement organization for North America. Mr. Andrzejewski spent 2012-2016 as the global procurement lead for all sales and innovation requirements based in Belgium, before coming back to North America in the role of senior director, commercial procurement in 2016. In 2019, he was promoted to his current role, maintaining commercial responsibilities in his scope as well. Dan currently lives in St. Louis with his wife, Amy, and three young children.