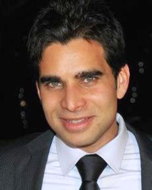 Vikram Bhaskaran was a founding member of the Pinterest partnerships team, helped launch Pinterest’s New York Office, and currently leads partnerships on the East Coast. He has been a pinner for over five years and pins about diving, cocktails, design, photography, travel, New York City, and the perfect Old Fashioned. Prior to Pinterest, he was a director of strategy and innovation at American Express and has also worked in strategy and business development functions at Disney, L2, HBO, the Corporate Executive Board, and NYCEDC. He holds an M.B.A. from NYU Stern and undergraduate degrees from the University of Michigan, Ann Arbor.