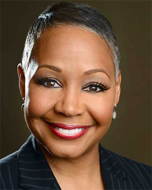 Lisa Borders has nearly 30 years of experience in operations, marketing, government relations, and public service. As president of the Women’s National Basketball Association (WNBA), she is responsible for setting the vision for the league and overseeing its day-to-day business and basketball operations.

In 2016, Ms. Borders’ first year with the WNBA, the league recorded its highest attendance in five years and experienced double-digit growth in television viewership on ESPN Networks. In 2017, live games streamed on Twitter for the first time and the league partnered with FanDuel for the WNBA’s first official one-day fantasy game.

Prior to joining the WNBA, Ms. Borders served as VP of global community affairs at The Coca-Cola Co. and chair of The Coca-Cola Foundation.

Ms. Borders serves as a trustee of Duke University, sits on the Advisory Board for the ANA’s #SeeHer initiative, and supports the #SheIS movement along with commissioners of several women’s professional sports leagues. She holds a B.A. from Duke University and an M.S.H.A. from the University of Colorado.