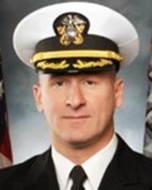 Capt. Boren graduated from Tulane University in 1995 with a B.S. degree in economics. He was designated a Naval Aviator in 1997. From 2008-2009, he attended the Naval War College, earning a M.A. degree in national security and strategic studies and a full Joint Professional Military Education credit.