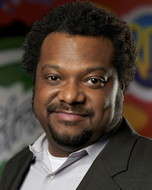 Bonin Bough is vice president of global media and consumer engagement at Mondelēz International. In this role, Mr. Bough is responsible for all forms of media, including leading and developing the partnerships, internal capabilities and strategies across all forms of consumer connections, including digital, TV, print and outdoors. Since joining Mondelēz International, he has been the driving force behind Mobile Futures, a program that partners the company’s brands with leading mobile startups. He has also played an integral role within the teams behind OREO’s real-time activations. Mr. Bough has been recognized as one of business’s hottest rising stars in Fortune’s 2011 40 under 40 and Fast Company’s 2011 100 Most Creative People in Business.