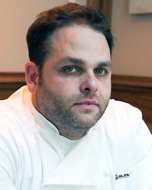 Chef James Bowen is a native of the San Francisco Bay Area, where he grew up watching his grandmother, an Indiana native, prepare country-style fare daily. Chef Bowen's love of cooking (and eating!) led him to the California Culinary Academy. Shortly after graduating, he moved to New York City to pursue a career in fine dining, securing a role at Riingo followed by positions at Aquavit and Gordon Ramsey at the London.

Most recently, Chef Bowen has lead the culinary teams at restaurants such as August, Red Rooster/Ginny's Supper Club and The Gander.