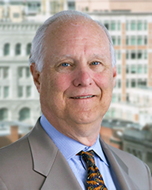 Thomas Boyd, partner and co-chair of Venable's Legislative and Government Affairs practice group in the Washington, DC office, focuses his practice on public policy and regulatory law. He counsels and represents clients on privacy, financial services, electronic commerce, and other legislative and related regulatory issues. His clients include financial service companies, such as banks, credit card issuers, insurance companies, online broker dealers, and other companies engaged in electronic commerce. He advises these companies on public policy matters before Congress and the Executive Branch, and guides them through the increasingly complex regulatory obligations associated with privacy compliance.

Prior to joining Venable, Tom was a partner and co-chair of the government affairs practice at a global law firm in Washington, DC. Before entering private practice, Tom held several high-ranking government positions. In 1988, he was appointed by President Ronald Reagan to be an Assistant Attorney General in charge of the Office of Legislative Affairs at the Department of Justice, and, in 1989, he was named to head the Department’s Office of Policy Development. He also served a three-year term from 2007 to 2010 as a member of the Department of Homeland Security Data Privacy and Integrity Advisory Committee, appointed by and reporting to the Secretary of Homeland Security. He has been highly rated by Chambers USA, among others, in both Privacy and Government Affairs.

In addition to his government experience, Tom served as deputy general counsel and managed the Washington, DC office for Kemper Corporation. He also ran the legislative affairs office of the Investment Company Institute for two years. Currently, Tom serves as counsel to the National Business Coalition on E-Commerce and Privacy, an organization of a dozen name-brand companies and associations formed in 2000 to support the enactment of consistent state and federal laws that encourage the growth of electronic commerce in a way that achieves a reasonable and practical balance between the legitimate privacy interests of both business and consumers. Over the course of his career, Tom has written over 50 essays and Op Ed commentaries on political and creative subjects for a series of national publications, including The Wall Street Journal, Investor’s Business Daily, The Washington Post, and The Boston Globe.