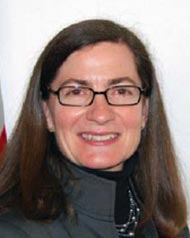 Julie Brill was sworn in as a Commissioner of the Federal Trade Commission April 6, 2010, to a term that expires on September 25, 2016.

Commissioner Brill has received several national awards for her work protecting consumers. She has testified before Congress, published numerous articles, and served on many national expert panels focused on consumer protection issues such as pharmaceuticals, privacy, credit reporting, data security breaches, and tobacco. Commissioner Brill has also served as a Vice-Chair of the Consumer Protection Committee of the Antitrust Section of the American Bar Association.

Commissioner Brill is married to Mark Miller, and has two sons.