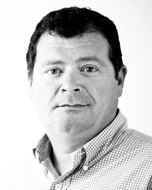 Stephen is the Co-Founder of FirmDecisions and became CEO & Managing Partner in June 2004.

FirmDecisions was the first and still is the largest independent global marketing compliance specialist providing financial transparency in the client-agency relationship to most of the world’s biggest advertisers.

Stephen’s background was originally within Y&R, joining them in 1989 and working for their health care network, Sudler and Hennessey. He took over as Finance Director in 1992 and then CFO for Europe in 1994. In 1997, Stephen became a partner in a private full-service U.K. agency that he then sold to Omnicom before founding FirmDecisions. As CEO, Stephen has overseen FirmDecisions growth into a network of 15 offices around the world and now part of Ebiquity PLC.

Stephen is a frequent presenter at industry seminars and workshops, across the U.S., Europe and Asia, including ISBA, WFA and ANA, and writes a monthly column for Accountancy Age addressing the industry challenges. Stephen worked with the ANA as a subject matter expert on their groundbreaking transparency study in 2016.