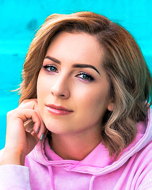 With upwards of 121 million views and an audience of over one million subscribers, Meghan produces and hosts a variety of video formats covering geek culture and gaming on her YouTube channels “Strawburry17” and “Strawburry17Plays”. She has  starred in several series including the hit CBS show The Amazing Race, Video Game High School, Fake Off on truTV, and was the host of Polaris Primetime on Disney XD. She was also the 25th anniversary Pink Power Ranger and voices Kimberly Hart in Battle For the Grid for Saban’s Mighty Morphin Power Rangers.