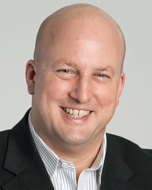 John Cayer has leadership of areas such as global marketing competency (including global model and global marketing university) and global marketing operations (including regional operation plans) at Kimberly-Clark. He joined Kimberly-Clark after 21 years with SC Johnson, where he served in a variety of leadership roles, including reporting to the chairman and CEO as director, global brand equity, responsible for global brand equity standards and global brand licensing and global category teams. Prior to that, he was the North America director of pest control (Raid, OFF!), lead of the Target sales team, marketing director of Japan SC Johnson, and brand director of Glade candles and Windex. Mr. Cayer has been a guest lecturer and frequent interviewer at Cornell, past president of the Cornell Club of Minnesota, and member of the Cornell University Council 2007–2011, and was named to the Cornell University Dyson School Undergraduate Business Council in 2009. He graduated from Cornell University in 1990 with a B.S. with distinction in applied economics with a food industry marketing concentration.