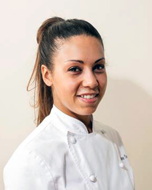 Chef Adrienne Cheatham grew up in the kitchens and dining rooms of the restaurants her mother managed in Chicago, Illinois. She would help with bussing tables, running food, washing dishes, whatever was needed, after homework was finished. At her parents’ insistence, she went to college before pursuing her culinary ambitions, attending Florida A&M University in Tallahassee, Florida where she studied business and journalism.

While in college Adrienne catered events on campus and in the community but wanted to return to restaurants. After graduating Magna Cum Laude she started working as a line cook at a busy seafood restaurant in Orlando. Wanting to learn all aspects of kitchens, she then worked in pastry production at the Sandestin Resort on the Gulf of Mexico before moving to New York City. In New York, Adrienne bartended at night while working for free during the day for various chefs around the city and enrolled in classes at the Institute of Culinary Education (ICE). Adrienne was referred to the kitchen at Le Bernardin where she started as a commis. During her eight years at the three-Michelin star restaurant, Adrienne made her way up the ranks, eventually becoming Executive Sous Chef. During that time she also worked with Chef Eric Ripert on his television show, Avec Eric, as well as the cookbook of the same name, testing and editing recipes. In 2014, Adrienne was a part of the planning and opening team of the restaurant’s Aldo Sohm Wine Bar and private dining restaurant, Privé.

Adrienne went on to work with Marcus Samuelsson as the Chef de Cuisine of the Marcus Samuelsson Group, opening Streetbird, where she received a Bib Gourmand from the Michelin Guide, and Marcus’ Bermuda before being promoted to Executive Chef at Red Rooster. Adrienne also travelled extensively with Chef Marcus for demonstrations, appearances, and festivals. Adrienne curated special tasting menus, including the Black History Month menu at Red Rooster, a multi-course menu inspired by female African-American chefs in the industry. When planning the Red Rooster Cookbook, Marcus tapped Adrienne to test and edit the recipes as well as cook/style all food that was photographed for the book.

Adrienne competed on season 15 of Top Chef, making it all the way to the finale and finishing second out of 16 cheftestants. She has been featured as a speaker at Cherry Bombe Magazine’s annual Jubilee festival and was the subject of a New York Times documentary series titled “Tastemakers.” Passionate about nutrition, she works with Schwan’s as part of the Chef’s Collective to develop healthy food for school lunch programs. Adrienne has appeared in Food & Wine, Us Weekly, Sports Illustrated online, Men’s Journal, Grubstreet, Eater, AM New York, among others. Adrienne shares a home in Harlem with her best friend and husband, Stephen Bailey. She is also the founder of SundayBest, a pop-up series held in secret locations around Harlem.