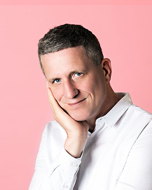 Formerly co-founder of Junior: The Rapid Invention Company (a product design accelerator for big brands) and, before that, executive creative director for AKQA in San Francisco, Stephen Clements has over 15 years of industry experience working at the top of the game. An accomplished product design and innovation leader, he created breakthrough work for brands such as Activision, eBay, Levi’s, Nvidia, Verizon, Visa and YouTube. Mr. Clements helped bring the 10K race to London for Nike by way of Nike’s Run London. He created the future of the TV interface for Xbox 360, and helped design and launch Xbox Live. Stephen reimagined the automotive digital ecosystem for Audi USA, creating the “R8 of digital experiences.” Mr. Clements also made “the world’s coolest basketball court” for Nike’s Jordan at the All-Star Weekend in New York, as well as bringing “beer on-demand” to the world with the Bud Light Button for Anheuser-Busch. Stephen’s work has featured in Wired, Forbes, BBC, Wall Street Journal, PSFK, New York Times and USA Today, and has been joked about on Conan O’Brien. His efforts have been recognized by global awards, including Cannes, One Show, the Effies and more. Stephen also has a product of his own: Monty, a chatbot sommelier.