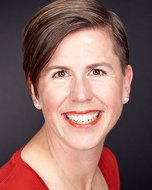 As a Yankee raised in Alabama and a nerd who realized halfway through a Ph.D. program that academia wasn’t right for her, Sara struggled to find her niche in life until she stumbled into fundraising. Chance and an inkling that she wanted to “do something that mattered” brought her to Colorado and to a position with the USA Shooting Team Foundation, a small, sport-oriented nonprofit that offered huge opportunity to learn about philanthropy’s role in sport. Sara now serves as manager of the Team USA Fund at the U.S. Olympic & Paralympic Committee, where she is responsible for raising support from Americans who believe in the power of sport to inspire and unite communities. She manages annual fund campaigns across a broad range of channels including direct mail, email and social media.

Sara volunteers as a director on the board of the Association of Fundraising Professionals (AFP) Southern Colorado Chapter and serves as a Colorado state leader for her running team, the Oiselle Volée. She enjoys running, gardening and her dogs, and she believes wholeheartedly in doing things that scare her.