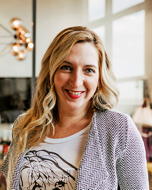 Animals and communication strategy are two of Jessie’s greatest passions, which is why she has found her nirvana combining the two. In her role as senior manager of digital advertising at Best Friends Animal Society, she leads the organization’s efforts to raise brand awareness, deepen engagement, and drive revenue through social media, display and paid search networks, and third-party ad placements.

Previously, Jessie served as the manager of social strategy at Best Friends, where she built a social media team, helped grow social communities by nearly six times, and established the program as a critical contributor to revenue and other organizational goals.

Before joining Best Friends, Jessie worked in various marketing, PR, and editorial roles in the publishing and health care sectors. An Atlanta native, Jessie received a B.A. in communications from the College of Charleston in South Carolina. She now lives outside of Detroit with her husband, 4-year old son, and her dog Jemma.