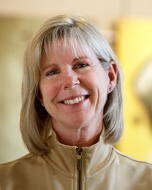 Diane Fannon joined The Richards Group in 2000 from Temerlin McClain, where she was executive vice president and managing director responsible for JCPenney and Adams Golf. She started her career in New York at Grey Advertising as a copywriter. After 18 years of award-winning work, she left advertising and her role as executive creative director at Tracy-Locke to run the international photography division of The Image Bank, a wholly owned subsidiary of Kodak. In 2010, she was named one of the most influential women in business in Dallas-Fort Worth. Ms. Fannon graduated from the University of Rhode Island with a double degree in English and education.