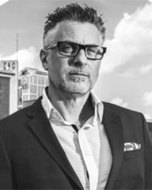 Known for his creative passion and his 30+ years at the helm of the award-winning Go West Creative.  Fischette has established himself as a creative force in the live event, media and entertainment industries.

In addition to his day to day duties at GWC, David has executive-produced the comedy film “Rock, Paper, Scissors,” a Season 4 of the Emmy Award-Winning Television Series “My Generation,” starring Leeza Gibbons. He also directed and produced the New York City Film Festival Award-Winning Thriller “Gods of Accident.”

David is a member of the YWCA Board of Directors as well as Pepperdine University’s Board of Visitors.