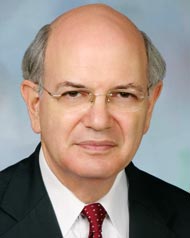 Former Congressman Martin Frost is a keen observer of national politics who has held a number of leadership positions for the Democratic Party and is considered one of the party’s top strategists.

From 1979-2005, Mr. Frost served as a member of Congress representing the Dallas-Fort Worth area in north Texas. During his distinguished career in the House, he served from 1999-2003 as Chair of the Caucus, the third highest elected leadership position for Democrats, and was the senior Democrat on the powerful Rules Committee. Mr. Frost also served for six years on the House Budget Committee and was chairman of the Health Task Force from 1985-88. During the 1996 and 1998 election cycles, Mr. Frost was the chair of the Democratic Congressional Campaign Committee, helping his party to a net gain of 14 House seats. When Mr. Frost departed Congress, he was the senior southern Democrat in the House and the dean of the Texas congressional delegation.

An innovative lawmaker with the ability to craft bipartisan legislation, Mr. Frost is a co-author of both the privacy provisions in the landmark financial industry deregulation statute, the 1999 Gramm-Leach-Bliley Act, and the 1992 Industrial Base and Defense Conversion Act, which enabled communities and individuals to respond to the downsizing of the defense industry. Mr. Frost was also the author of the National Amber Alert law that helps find children victimized by predators. From 1990-95, he also chaired a special House Task Force established to help eastern and central European nations transition to democracy after the fall of the Berlin Wall.  He has continued democracy-building efforts as a board member of the National Endowment for Democracy (NED). He was also co-chair with former Rep. Jennifer Dunn (R-WA), of the Bipartisan Working Group on Youth Violence and a co-chair with former Rep. Christopher Cox (R-CA), of a bipartisan working group on continuity of government, which examined ways to ensure the continued operation of the federal government after a terrorist attack or a natural disaster.

Mr. Frost was a fellow at the Institute of Politics at the John F. Kennedy School of Government at Harvard for the fall 2005 semester and was named a Public Policy Scholar at the Woodrow Wilson International Center for Scholars in January 2006. He served as president of America Votes, a nationwide voter turnout organization, during the 2008 general election cycle.

Mr. Frost is a graduate of the University of Missouri-Columbia with a bachelor of journalism degree. After journalism school, Mr. Frost worked as a reporter for the Wilmington (DE) News-Journal and Congressional Quarterly Weekly Report in Washington before going to law school.