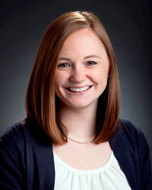 Erin Frum currently serves as the enterprise media director for Nationwide’s Enterprise brand team, overseeing the media planning and buying for Nationwide (e.g. television, online video, programmatic and paid social). She began her career with Nationwide in 2010 as a member of the Marketing Leadership Rotation Program. In 2012, Ms. Frum joined the national advertising team, responsible for the development and execution of Nationwide’s national advertising campaigns. She made the transition to the enterprise media team in 2015, and enjoys working closely with her agency partners to build the most effective media plans for the brand. Prior to joining Nationwide, Erin held marketing positions at both Scotts Miracle-Gro and Brunswick Corporation. She holds a Bachelor of Science degree in organizational communication from Ohio University, and a Master of Business Administration from the Fisher College of Business at The Ohio State University. Outside of work, Erin is a passionate volunteer for the Make-A-Wish organization.