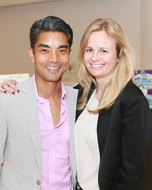 Arthur Gallego has worked with Vita Coco since 2004, when he launched the brand while on the agency side. Since then, Mr. Gallego has been the brand’s lead corporate communications and PR counsel, directing the majority of corporate and consumer PR programs for the past ten years and raising awareness of coconut water with the media, beverage analysts and consumers. Mr. Gallego has overseen communications around the brand’s largest initiatives, including a 2010 celebrity investor initiative, which leveraged investors Madonna and Matthew McConaughey to elevate the Vita Coco brand and the category of coconut water in the global media; the 2011 and 2012 advertising campaigns with Rihanna; and the 2014 investor deal based on a minority stake sale to China’s Reignwood Group, the owners of Red Bull China. Mr. Gallego has also overseen the majority of the brand’s new product launches. Mr. Gallego is currently global director, corporate communications and in addition to leading North American communications, he also oversees standards and practices in China, The Philippines and New Zealand.