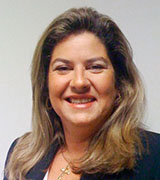 Yvonne M. Imbert-Garratón joined CBS Interactive Inc. in September, 2007, and serves as Director of Business & Legal Affairs. She is primarily responsible for negotiating and drafting Content Licensing Agreements for the Sports Division of CBS Interactive, and clearance and compliance for CBS Interactive Contests & Sweepstakes.

While at CBS, Yvonne has been involved with the March Madness on Demand and Sports’ Fantasy products, and has been responsible for major promotions with strategic advertisers including Sprint, Saturn, Pontiac, Macy’s, Snickers, Best Foods, Motorola, Bertolli and Ford Motor Company.

Yvonne is licensed to practice in the State of Florida and the Commonwealth of Puerto Rico and is a member of the Executive Committee of the Entertainment, Arts and Sports Lawyers Association of the Florida Bar.

Yvonne earned her J.D. from the Law School of the University of Puerto Rico and an LL.M in Intellectual Property from Franklin Pierce Law Center, University of New Hampshire. She attended the school of Communications at Loyola University in New Orleans, Louisiana and majored in Advertising and TV Production.