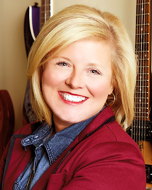 Deana Ivey serves as Executive Vice President and Chief Marketing Officer for the Nashville Convention & Visitors Corp and has been with the organization since 1997. She helps oversee and coordinate the organization’s marketing efforts as Nashville continues its momentum as a top global destination. The city’s tourism industry is at an all-time high with 15.8 million annual visitors and $7 billion in direct visitor spending. Ms. Ivey has played a key role leading Nashville in branding itself around the world as Music City. She has been instrumental in creating and producing successful marketing initiatives for the city, including Let Freedom Sing! Music City July 4th, Music City Midnight: New Year’s Eve in Nashville, Music City Walk of Fame and two award-winning Nashville documentaries. Before her work in Nashville, Ms. Ivey served the tourism industry in Pigeon Forge and Gatlinburg, Tenn. for ten years.