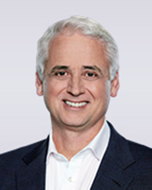 Mr. Kenny has spent his career in data science and artificial intelligence, especially focused on the retail, marketing, and media industries. He most recently served as SVP of cognitive solutions at IBM, as well as chairman and chief executive of The Weather Company, which was acquired by IBM. He also previously served as president of Akamai and managing partner of VivaKi after overseeing the sale of Digitas, Inc. to Publicis as co-founder and CEO.

Mr. Kenny received his bachelor’s in industrial administration from the GM Institute (now Kettering University) and holds an M.B.A. from Harvard Business School.