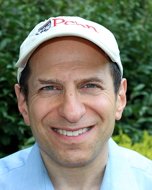 Mr. Kluger received his bachelor's from the University of Pennsylvania, and a dual M.B.A. in information systems and marketing from the New York University Leonard N. Stern School of Business.