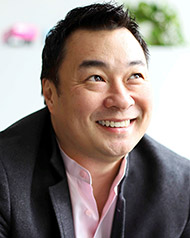 Victor Lee is responsible for leading all marketing, communications, commercialization, media, product development and consumer insights at RXBAR (a Kellogg company). In this role he drives all marketing, product and messaging strategies for the entire portfolio of products including RXBAR, RX Kids, RX Nut Butter, RX Oats as well as the development of new product and category innovations under the RX and Insurgent brand. His goal is to continue to push the value and culture of RX Brands as a transparent and No B.S. organization that believes in simple foods made with the best ingredients and without sacrifice.

Prior to RXBAR, Victor was the SVP Digital Marketing at Hasbro and was responsible for digital marketing for all Hasbro brands including Transformers, Monopoly, My Little Pony, Baby Alive, Nerf, Play Doh, Power Rangers and others. There he helped develop and transform the company to a digital first entertainment and story driven business creating one of the industry’s largest YouTube presence, launching Hasbro’s first ever global web-based animation series for Transformers and creating a fan-first marketing approach for brands like Marvel and Star Wars.

Prior to joining Hasbro in 2011, he was Senior Vice President of Marketing at Digitas and led the relationships for brands such as, Goodyear, Buick, GMC, Harley-Davidson, Pontiac, IHG, OnStar, Saturn and GM Branded Entertainment, some of which have won awards from The Pro Awards, The Reggies, The Effies, MIXX, MITX, and Cannes Lions.

Prior to Digitas, he was Vice President, Creative and Strategy, for Alloy Media and Marketing and Senior Publicist at Viacom parent, National Amusements.

In 2012, he was recognized on Brand Innovators’ Top 40 Under 40 list for his professional accomplishments and ability to leverage digital media and emerging advertising technology platforms and currently serves on their Advisory Board. He serves as an Effies Worldwide Finalist Juror and Pro Awards Final Judge. Victor has also keynoted or spoken at SXSW, CES, ANA, Mobile Marketing Association, New York Advertising Week, INBOUND and others.

He is a Boston native and holds a B.A. from Boston College where he was also an adjunct professor of Digital Marketing and Digital Commerce and received his M.B.A. from Northeastern University