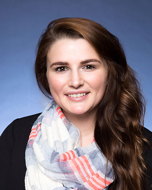 Prior to joining Marines’ Memorial, Chelsea was a development manager with an environmental nonprofit based in the Bay Area focusing on establishing new and innovative programs and major donor cultivation and stewardship.

From 2013 through early 2017, Chelsea was based in the Reno-Tahoe area and was involved with Renown Health Foundation, starting as a member of their business council and eventually transitioning into their development team focusing on network-wide fundraising events, committee and board development and major donor research and cultivation.

Previous to this, Chelsea held various sales executive positions ranging from cosmetics to media and attended the University of Nevada, Reno studying English and entrepreneurship.