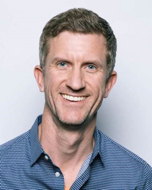 Alec McNayr is the SVP of social media at Fullscreen, a next-generation content and marketing company, where he runs a 200-person creative team that works with clients like AT&T, Char-Broil, Disney, Sony Pictures, Netflix, Mattel and Timberland. Previously, he founded the advertising agency McBeard (acquired by Fullscreen in 2015), co-authored the top-selling humor book Historical Tweets and sold a pilot script to ABC. Last year, he was included in Ad Age's "40 under 40" list (he barely made it). He lives in Los Angeles with his wife and three daughters.