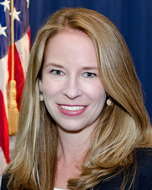 Terrell McSweeny was sworn in as a commissioner of the FTC on April 28, 2014, to a term that expires on September 25, 2017. Previously, she served as chief counsel for competition policy and intergovernmental relations for the U.S. Department of Justice Antitrust Division, which she joined after serving as deputy assistant to the president and domestic policy advisor to the vice president from January 2009 until February 2012, advising President Obama and Vice President Biden on policy in a variety of areas, including health care, innovation, IP, energy, education, women’s rights, criminal justice, and domestic violence. Prior to that, she was Senator Joe Biden’s deputy chief of staff and policy director in the U.S. Senate and an attorney at O’Melveny & Myers LLP. Ms. McSweeny is a graduate of Harvard University and Georgetown University Law School.