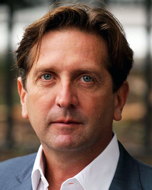 Matthew Miller is the president and CEO of the Association of Independent Commercial Producers (AICP), where he helps to represent the interests of independent companies that specialize in the production and post production of commercials in various media—film, video, digital—for advertisers and agencies.

Previously, Mr. Miller was a director in the member services department of the ANA.

Mr. Miller is a trustee of the Directors Guild of America (DGA) Producer Pension and Health Funds and serves as chairman of the DGA Commercials Qualifications Administration. He is also a member of the American Society of Association Executives.