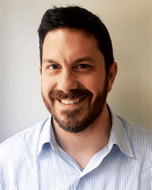 Mr. Milton joined Infogroup from Anne Lewis Strategies and has written two books published by O’Reilly Media. He earned a B.A. in philosophy from New College of Florida and an M.A.R. in religious ethics from Yale University.