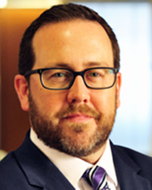 Benjamin (Ben) Mulcahy is a partner in DLA Piper’s intellectual property and technology practice and co-chair of the firm's national advertising team. Mr. Mulcahy represents major film studios, broadcast and cable television networks, retailers, prominent website operators, major consumer brands and their agencies in all aspects of sports, entertainment and interactive marketing, as well as in structuring and negotiating virtual reality, gaming, esports and innovative branded entertainment initiatives, and navigating the rights of stakeholders and the evolving laws that affect how campaigns are activated and content is distributed across all media.

Benjamin has been ranked as one of the country's leading lawyers by The National Law Journal, which named him to its annual "40 Under 40" list of leading lawyers. Variety, one of the leading entertainment industry publications, has twice recognized him in its “Legal Impact Report.” Variety has also named Mr. Mulcahy to its “Dealmakers Impact Report.” Ben has been consistently selected for inclusion in annual editions of Chambers USA: America’s Leading Lawyers for Business and Legal 500, and has been recognized by the Daily Journal, Lawdragon Magazine and Law & Politics magazine.