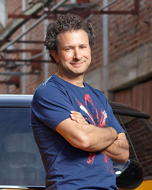 Lee Nadler is a brand and business builder, with experience in all aspects of marketing.

Lee has built a career building and transforming businesses as a leader across all disciplines in the marketing industry.  He started his career at a leading WPP promotion agency, then joined creative agency KBS&P and later became Partner, President & CEO of Digital Pulp. In 1996, Nadler became the first head of marketing for digital media technology pioneer DoubleClick, now a division of Google. Most recently, for the past six years Lee has been a key member of marketing for global, iconic brand MINI.

Lee initially joined MINI in 2012 to manage all U.S. marketing and digital platforms. In 2017, Lee was promoted to grow the MINI business and brand by creating transformational initiatives and connecting to new audiences in key U.S. metro markets.

For ten years, prior to joining MINI, Lee ran a specialized consulting practice that he founded, Sherpa Marketing, Inc., named for the Nepalese guides who have inspired him. He has identified several Sherpa Principles to lead teams in overcoming obstacles and accomplishing strong results.

Lee is on the Board of The Advertising Club, was inducted into the American Advertising Hall of Achievement and was named by Ad Age as one of the 21 people to watch in the 21st century. Lee lives in the West Village with his wife, daughter and dog.