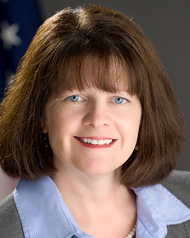 Maureen K. Ohlhausen was sworn in as a commissioner of the Federal Trade Commission on April 4, 2012, and was designated to serve as acting FTC chairman by President Donald Trump in January 2017. Prior to joining the Commission, she was a partner at Wilkinson Barker Knauer, LLP, where she focused on FTC issues, including privacy, data protection and cybersecurity. Ms. Ohlhausen previously served at the Commission for 11 years, most recently as director of the Office of Policy Planning from 2004 to 2008, where she led the FTC's Internet Access Task Force. She was also deputy director of that office. From 1998 to 2001, Ohlhausen was an attorney advisor for former FTC Commissioner Orson Swindle, advising him on competition and consumer protection matters. She started at the FTC General Counsel’s Office in 1997. Before coming to the FTC, Maureen spent five years at the U.S. Court of Appeals for the D.C. Circuit.