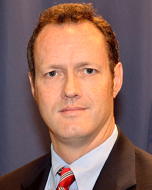 Christopher N. Olsen has served as Acting Deputy Director of the Bureau of Consumer Protection at the Federal Trade Commission since September 2014. In his current role, he oversees Bureau activities related to consumer privacy, financial practices, and enforcement of Commission orders. Prior to that, he served as assistant director in the Division of Privacy and Identity Protection at the FTC, focusing on enforcement and policy matters involving consumer privacy and data security. He has managed significant consumer privacy initiatives at the Commission, including the development of the FTC’s March 2012 report, Protecting Consumer Privacy in an Era of Rapid Change: Recommendations for Businesses and Policymakers; the development of the February 2013 staff report, Mobile Privacy Disclosures: Building Trust Through Transparency; and the May 2014 report, Data Brokers: A Call for Transparency and Accountability. Before joining the FTC, he served in various senior positions at the Federal Communications Commission, where he enforced regulations governing local competition and consumer privacy issues. Prior to joining the FCC, Mr. Olsen was a commercial litigation partner at Howrey & Simon. He received a B.A. from Dartmouth College and a J.D. from the University of Virginia School of Law.