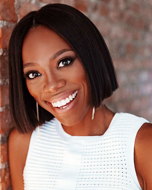 Yvonne Orji is a Nigerian-American actress, comedienne and writer who continues to display her versatility and passion with each project she takes on. She stars in HBO’s critically acclaimed comedy series Insecure. The show follows the friendship of two modern-day black women and all their uncomfortable experiences and racy tribulations. Ms. Orji stars as one of these women opposite Issa Rae, who is executive producing the show along with Prentice Penny and Melina Matsoukas. She will be making her feature film debut in Universal’s Night School alongside Kevin Hart and Tiffany Haddish. Yvonne is also currently developing a sitcom based on her life entitled First Gen, that Oprah Winfrey and David Oyelowo are executive producing. The show is a comedy about a Nigerian girl who trades medical school for a career in stand-up comedy and the adventures that ensue after her strict African mother discovers her plans. Ms. Orji is also a distinguished stand-up comedian. This summer, she opened for Chris Rock in Atlanta and will be opening for him at other stops on his tour later this year. Yvonne is also known for her inspiring TED Talk, “The Wait is Sexy,” in which she discusses her virginity and decision to wait until marriage.