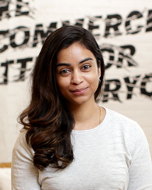 Qoratia Parmanand is legal counsel at Shopify, serving as product and commercial counsel. In this role, she provides legal support for Shopify's product, platform, film and TV production, and advertising and marketing teams.

Ms. Parmanand previously provided legal support at Google, Interac and MoneyKey, a U.S.-based fin-tech startup, with a focus on tech innovation. She began her legal career as an attorney at Werksmans Attorneys in South Africa, where she was a member of the commercial and regulatory practice groups.

Ms. Parmanand sits on the Standards Council of Ad Standards Canada, which reviews and adjudicates complaints under the Canadian Code of Advertising Standard. She is also a steering committee member of the National Ballet School of Canada.