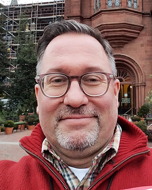 John Perell has been fundraising with nonprofits for 20 years and has been with Smithsonian as Director of Strategy for Member Experience, Direct Response and Shared Services since 2013.  In his role, he works within a collaborative network to expand Smithsonian’s national base of philanthropic supporters across the organization’s many museums, as well as identify and develop strategies to move prospects into mid-level, major and planned giving relationships.  He is also the Director of the Friends of the Smithsonian, the largest member and donor program at the Smithsonian.  Prior to Smithsonian John has worked on both agency and nonprofit sides.  From 2002-2010 John worked at the American Red Cross NHQ where he developed successful fundraising strategies for disaster, national and chapter donors alike.  At the Lukens Company he worked with Arts and Culture clients developing multi-channel strategies to increase membership and philanthropy.  He also serves on the board of the Direct Marketing Fundraisers, International Museum Membership Conference and American Museum Membership Conference.