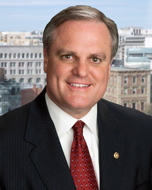 Mark Pryor is an attorney and former Attorney General of Arkansas who served as a United States Senator for 12 years. He earned a reputation as a voice of reason for having brought Democrats and Republicans and competing interests together to find common ground and get things done. Currently, he is a partner at Venable LLP serving as the Co-Chair of the Legislative and Government Affairs and State Attorneys General practice groups.

Senator Pryor began his career in public service in 1990 as a member of the Arkansas State House of Representatives. In 1998, he was elected Arkansas’s Attorney General, making him the youngest chief law-enforcement officer in the nation.

Senator Pryor received a Bachelor of Arts degree in History and a Juris Doctor degree from the University of Arkansas.