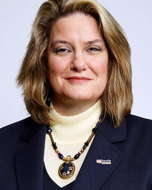 Ms. Quinn is Executive Vice President, Chief Strategy and Reputation Officer for Strategy and Corporate Affairs of U.S. Bancorp. Ms. Quinn, 50, has served in this position since joining U.S. Bancorp in September 2013 and has served on U.S. Bancorp’s Managing Committee since January 2015.  From September 2010 until January 2013 she served as Chief Marketing Officer of WellPoint, Inc. (now known as Anthem, Inc.), having served as Head of Corporate Marketing of WellPoint from July 2005 until September 2010.  Prior to that time, she served as Chief Marketing and Strategy Officer at The Hartford from 2003 until 2005. Kate holds a BA degree from Hunter College, New York and an MBA from the University of Phoenix. Kate has served on the board of Fraser, Minnesota’s largest and most experienced provider of autism services, since 2013.  She is also serving on the boards of Slumberland Furniture as of January 2016 and Minnesota Public Radio (MPR) as of May 2016.