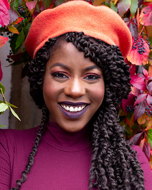 Journalist, influencer, and television host Oneika Raymond is a lifestyle correspondent for NBC New York and the host of Travel Channel’s One Bag and You’re Out and Big City, Little Budget.