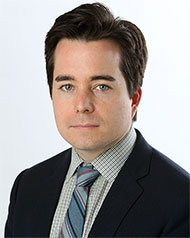 As a counsel within The New York Times Company’s legal department, Brian Rideout supports the advertising and conference departments, as well as the newsroom in matters ranging from agreements with service providers and other outside entities to content licensing and questions of copyright, trademark rights and fair use.

Before coming to The Times, Mr. Rideout worked at National Public Radio, starting as a legal fellow before transitioning into a counsel role.

Mr. Rideout received both his B.A. and J.D. from The George Washington University.