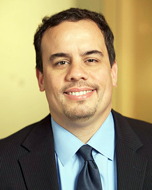 As chief contracts officer for SAG-AFTRA, Ray Rodriguez has served as either lead negotiator or second chair at all major negotiations (other than broadcast news) since taking on his role at the merged union, including negotiations covering theatrical motion pictures, television, commercials, corporate and educational videos, and video games. He is also a trustee and former chair of the Screen Actors Guild Producers Industry Advancement and Cooperative Fund and a trustee of the Screen Actors Guild Producers Pension and Health Plans. Mr. Rodriguez previously served as deputy general counsel for the Screen Actors Guild in its New York office, where he managed the union’s legal function for New York and the Eastern states. He came to the union with experience as a labor and employment lawyer for O’Melveny & Myers LLP and Wilson Sonsini Goodrich & Rosati, and also served as a law clerk to the Honorable Vaughn R. Walker of the Northern District of California. Ray is a graduate of Harvard College and the Columbia University School of Law, where he was an executive editor of the Columbia Law Review.