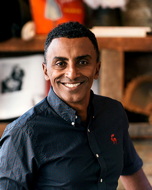 Marcus Samuelsson is the acclaimed chef behind many restaurants worldwide including Red Rooster Harlem, Streetbird Rotisserie, and Marcus B&P.  Samuelsson was the youngest person to ever receive a three-star review from The New York Times and has won multiple James Beard Foundation Awards including Best Chef: New York City. He was tasked with planning and executing the Obama Administration’s first State dinner. Samuelsson was also crowned champion of television shows “Top Chef Masters” and “Chopped All Stars,” and served as a mentor on ABC’s “The Taste.” A committed philanthropist, Samuelsson co-produces the annual food and culture festival Harlem EatUp!, which supports Harlem Park to Park and Citymeals on Wheels.

Samuelsson is co-chair of the board of directors for Careers through Culinary Arts Program (C-CAP). In May 2016, he was inducted into the James Beard Foundation Who’s Who of Food and Beverage in America. He is the author of multiple books including The New York Times bestselling memoir Yes, Chef, the young adult version — Make It Messy, Marcus Off Duty cookbook, and his newest book — The Red Rooster Cookbook: The Story of Food and Hustle in Harlem. In addition, he is one of the founders of the website Food Republic. In June 2017, he opened Red Rooster Shoreditch in East London and most recently has opened Marcus B&P in Newark, New Jersey in November 2017.

He is currently filming his new series with VOX/Eater and PBS entitles No Passport Required, which is scheduled to air summer 2018.