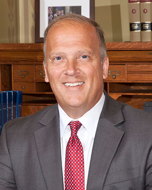 Brad Schimel is a career frontline prosecutor who began his career nearly three decades ago. After 25 years in the district attorney’s office, Mr. Schimel was elected Wisconsin attorney general in 2014 and has prioritized the fight against heroin and prescription opioid abuse, methamphetamine, human trafficking and child abuse. His distinguished career includes recognition from the Wisconsin Association of Victim and Witness Professionals as “Wisconsin Professional of the Year” for his work on behalf of survivors of sexual assault. As attorney general, Mr. Schimel leads the effort to create a stable and predictable legal and regulatory environment in Wisconsin, represents Wisconsin from legal challenges and enforces the rule of law. He lives with his wife and two daughters in the town of Genesee in Waukesha County, Wisconsin.  Schimel is an active member of St. Anthony on the Lake Parish, a Harley-Davidson enthusiast and plays bass in a classic rock band, 4 On the Floor.